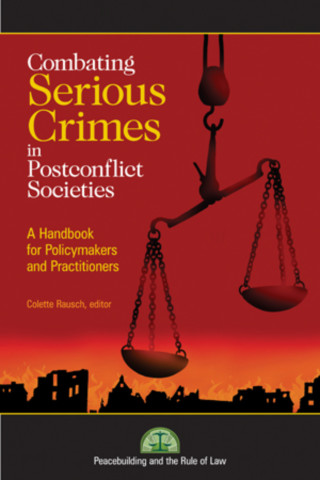 
"This groundbreaking publication will be an invaluable tool in the hands of those facing the challenges of restructuring postconflict societies. Put together by seasoned practitioners and distinguished scholars, it explains what approaches have and haven’t worked, discusses the kinds of resources required, and provides a rich fund of practical examples and references...This book should be on the desk of every chief of mission and international official tasked with rebuilding societies traumatized by conflict."

Colette Rausch is a Reconciliation, Neuroscience, and Trauma Research Affiliate at the Mary Hoch Center for Reconciliation, Jimmy and Rosalynn Carter School for Peace and Conflict Resolution at George Mason University. Rausch was a senior advisor in the Applied Conflict Transformation Center. In 2018, she completed an intensive three year program and received certification in the neurobiology and resolution of trauma. She most recently led the development of new approaches, research, learning and tools to be used to address violent extremism, strengthen inclusive societies, and promote justice, security and rule of law. She has directed or participated in missions and projects in more than two dozen countries, including Afghanistan, Guatemala, Iraq, Kosovo, Liberia, Libya, Myanmar (Burma), Nepal, Nicaragua, Peru, Senegal and Yemen. In Nepal, she pioneered Justice and Security Dialogue, an innovative approach to fostering cooperation between local communities and security forces that has since been used in a dozen countries. Before joining the Institute, she worked for the Organization for Security and Cooperation in Europe’s Mission in Kosovo, serving first as head of the Rule of Law Division and then as director of the Department of Human Rights and Rule of Law. Earlier in her career, Rausch worked for the U.S. Department of Justice (DOJ) as its resident legal adviser in Bosnia and Hungary, and as the DOJ program manager for Central and East Europe.In addition to her international assignments, Rausch was a federal prosecutor with the DOJ in Las Vegas; director of the telemarketing and consumer fraud unit in Nevada’s Attorney General’s Office; and an assistant federal public defender in Nevada.A recipient of numerous DOJ performance and special achievement awards, Rausch received a bachelor's degree from the University of Nevada, Reno and a juris doctor from Santa Clara University School of Law.