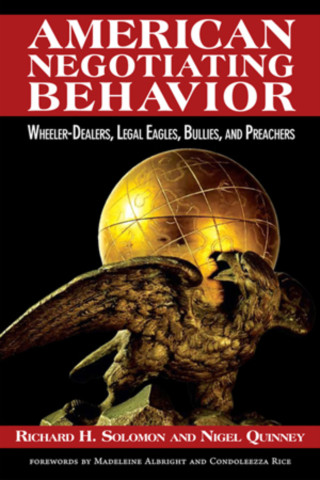 Informed by discussions and interviews with more than fifty seasoned foreign and American negotiators, this landmark study offers a rich and detailed portrait of the negotiating practices of American officials. Including contributions by eleven international experts, i assesses the multiple influences—cultural, institutional, historical, and political—that shape how American policymakers and diplomats approach negotiations with foreign counterparts and highlights behavioral patterns that transcend the actions of individual negotiators and administrations.

“A goldmine of useful information and ideas that can help make American negotiators--and their counterparts--more effective and the process of negotiations better understood."

"This book is a gold-mine for anyone interested in American negotiation styles and methods, analysed by two perceptive co-authors and eight experienced international practitioners of diplomacy. One of many merits of the book is that it sets out the parameters for a future diplomacy, adapted to a world where dialogue and negotiations hopefully will be the primary tools for solving conflicts and global problems."

“American Negotiating Behavior may well become the definitive primer on the art of effective cross-cultural negotiating. It should be an important part of the education of U.S. diplomat, as well as anyone engaged in international transactions.”

Nigel Quinney is president of The Editorial Group and a consultant to European and American think tanks, academic institutions, and multinational corporations. He has more than twenty years' experience as an editor, writer, and researcher in the fields of international relations and conflict resolution.