Jennifer McCoy, PhD, is a political science professor at Georgia State University. She was named a Distinguished University Professor in the inaugural class of 2013 and served as director of the Global Studies Institute (2015-16). Prior to this, Dr. McCoy served as Director of the Carter Center’s Americas Program (1998-2015), leading projects on democratic strengthening, mediation and dialogue, and hemispheric cooperation. A specialist on democratization and polarization, mediation and conflict prevention, election processes and election observation, and Latin American politics, Dr. McCoy has authored or edited six books and dozens of articles. Her latest volume is Polarizing Polities: A Global Threat to Democracy, co-edited with Murat Somer (2019). She teaches courses on democratic erosion, comparative democratization, international norms, and Latin American politics.

Dr. McCoy’s current research project on Polarized Democracies seeks to determine the causes, consequences and solutions to polarized societies around the world, including Venezuela, Turkey, Hungary, Thailand, Hungary, Greece, Bangladesh, Philippines and the United States. Leading a group of international scholars and funded by NSF, International Studies Association, and Central European University, McCoy organized two international workshops whose work was published as book-length volumes of the American Behavioral Scientist (Jan 2018) and Annals of the American Academy of Political and Social Science (January 2019). She is currently working on the micro-foundations of severe polarization and democratic erosion. In particular, she is researching possible antidotes to the hostility and distrust of the “Other” and decreasing support for democracy caused by Us vs Them polarizing strategies of populist political leaders. This collaborative work includes online survey experiments in the U.S., Hungary and North Macedonia, funded by a GSU Provost Faculty Fellowship, Central European University, and a residential fellowship at the Institute of Advanced Study in Budapest (spring 2019).

At The Carter Center, Dr. McCoy created the group of Friends of the Inter-American Democratic Charter; directed The Carter Center’s projects on Mediation and Monitoring in Venezuela 2002-2004, Ecuador-Colombia Dialogue Group 2008-2010, and U.S.-Andean Dialogue Group 2010-2011; led over a dozen election monitoring missions and organized former President Carter’s historic trips to Cuba in 2002 and 2011. She served as a mediator in Venezuela, and between Ecuador and Colombia, and published with Francisco Diez an analysis of the Venezuelan conflict in International Mediation in Venezuela (USIP Press, 2011).

McCoy is a life member of the Council on Foreign Relations; member of the International Women’s Forum; and co-chair of the Atlanta chapter of the Scholar’s Strategy Network. 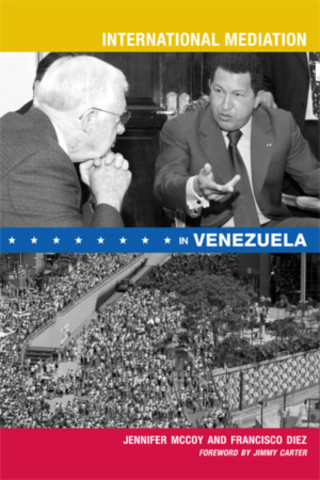