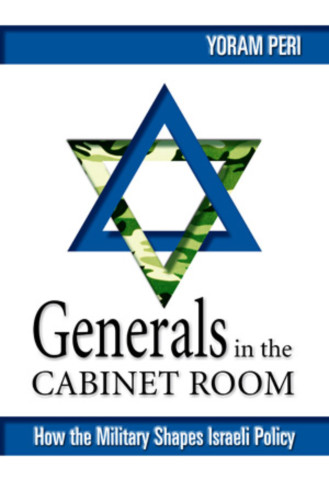 Generals in the Cabinet Room

A dramatic shift of power has taken place within Israel’s political system; where once the military was usually the servant of civilian politicians, today, argues Yoram Peri, generals lead the way when it comes to foreign and defense policymaking.

Yoram Peri is the Abraham S. and Jack Kay Chair in Israel Studies, and Director of the Joseph and Alma Gildenhorn Institute for Israel Studies, the University of Maryland at College Park.

A former political advisor to the late Prime Minister Yitzhak Rabin, founder and former head of Chaim Herzog Institute for Media, Politics and Society and professor of Political Sociology and Communication in the department of communication at Tel Aviv University, and former Editor-in-chief of the Israeli daily, Davar.

Born in Jerusalem, he earned his B.A. and M.A. in Political Science and Sociology at the Hebrew University and his Ph.D. from the London School of Economics.

Professor Peri has held numerous prestigious positions, such as senior fellowship at the US Institute of Peace in Washington DC, Fulbright scholar at the American University’s School of International Service, visiting professorships at Harvard University and Dartmouth College, senior fellowship at the Jaffe Center for Strategic Studies in Tel Aviv University, and senior lecturer in the department of communication at the Hebrew University.

In addition to his academic career, Prof. Peri was a journalist and is a political commentator. He published extensively in newspapers and magazines in and outside Israel, and also was an editor and host of TV and radio programs. During Golda Meir’s term as Prime Minister, he was the spokesperson for the Israel Labor Party and its special emissary to Europe. Among his various public positions, Prof. Peri was president of the Association of the editors of Israel’s Daily Newspapers and a member of the Press Council.

Prof. Peri published extensively on Israeli society, media and politics. Among his publications are Generals in the Cabinet Room (U.S. Institute of Peace Press), The Assassination of Yitzhak Rabin (Stanford University Press), and Between Battles and Ballots: Israel Military in Politics (Cambridge University Press). His book Telepopulism: Media and Politics in Israel was published by Stanford University Press in 2004, and in October 2005 he published his latest book (in Hebrew) Brothers at War: Rabin's Assassination and the Cultural war in Israel. For this book he was granted the 2006 award by the Presidents and Prime Ministers memorial council. His latest book, Generals in the Cabinet Room: How the Military Shapes Israeli Policy, was published in May 2006 by the United States Institute of Peace. The book has been selected as an outstanding book and as one of the best of the best by the Association of American University Press, in 2007. Since 2011 he is also the editor of Israel Studies Review, the flagship academic journal of the Association for Israel Studies (AIS).