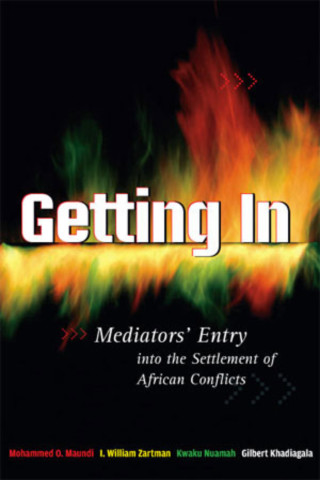 This collaboration of renowned scholars and a practitioner in conflict management and African politics seeks to draw wide-ranging and timely conclusions on the early stages of mediation from six case studies: Burundi, Rwanda, the Congo, Sudan, and West Africa and the border conflict between Ethiopia and Eritrea.

Mohammed O. Maundi is with the Tanzanian Mission to the United Nations in New York.

Gilbert M. Khadiagala is the Jan Smuts Professor of International Relations and Director of the African Centre for the Study of the United States (ACSUS) at the University of the Witwatersrand, Johannesburg, South Africa. He was the Head of Department of International Relations at Wits (2007-2017). Professor Khadiagala obtained a B.A. degree in Political Science from the University of Nairobi, Kenya; an M.A. in Political Science from McMaster University, Hamilton, Ontario, Canada; and a PhD in International Studies from the School of Advanced International Studies (SAIS), the Johns Hopkins University in Washington, DC. He has taught for over 30 years in Kenya, Canada, the United States, and South Africa. His research focuses on African politics, mediation, and conflict resolution. Professor Khadiagala was the founding director of the Africa Program at the Woodrow Wilson Centre for International Scholars in Washington DC (1999-2002) and has been a consultant to various international organizations.

Dr. Kwaku Nuamah is Senior Fellow at the Center for Conflict Resolution at Salisbury University and Senior Associate in the Department of International Health at the Johns Hopkins University’s Bloomberg School of Public Health, Baltimore MD. He holds a PhD in Conflict Management from the Johns Hopkins University’s School of Advanced International Studies and has 20 years experience researching, teaching and practicing conflict resolution in the United States and Africa.

Dr. Nuamah’s interest in conflict resolution research dates back to the early 1990s, when as research assistant at the Legon Center for International Affairs and Diplomacy (University of Ghana, Legon), he conducted research on the causes of civil war in West Africa and the role early warning in the search for sustainable peace in Africa. Later, as program officer for conflict management at the Institute for Economic Affairs (Accra, Ghana), he tracked and analyzed the dispute resolution roles of traditional leaders in Ghana, as well as managed a series of workshops that explored the role of civil society in the first Liberian civil war negotiations. Dr. Nuamah continued to pursue these interests as a graduate student at Johns Hopkins University, where he explored (for his PhD dissertation) the dynamics of negotiated settlements in the Ethiopia-Eritrea border conflict, the Peru-Ecuador border conflict, and the northern Ghana ethnopolitical conflict.

As an instructor, Dr. Nuamah has taught both graduate and undergraduate courses in conflict resolution at Salisbury University, American University, Georgetown University, Brown University, and the University of Maryland at College Park. He has also worked as a negotiation trainer for the Center for Peace Building International, the ICONS program at College Park, and at the KEDGE Business School in Bordeaux France, where he runs an annual negotiation-training workshop for students. He has also conducted peacebuilding capacity assessment for the Bureau for Crisis Prevention and Recovery at the United Nations Development Program. In addition to these experiences, Dr. Nuamah also has a substantial research and work background in the governance and global security policy fields. His experiences in these areas include working as director of research for the Democracy Coalition Project at the Open Society Institute, coordinator for the G-8 /Africa Partnership Project at the Council on Foreign Relations, consultant on civil society advocacy for the International Foundations for Election Systems, and as consultant on governance and institutional effectiveness for the Ghana Center for Democratic Development. He has also performed consultancy services on African security concerns for several institutions including the National Intelligence Project, Management systems International, the Science Applications International Corporation, and the US-Africa Command (Africom).

Dr. Nuamah was born in Ghana and became a naturalized American citizen in 2008. He is the co-author of Getting in: Mediators’ Entry into the Settlement of African Conflicts (Washington D.C.: United States Institute of Peace, 2006). He has also published several articles on contemporary conflict resolution processes in Africa and is currently working on a new book exploring the sources and uses of leverage in negotiation.

I. William Zartman is Professor Emeritus at the Paul H. Nitze School of Advanced International Studies (SAIS) of Johns Hopkins University. He earlier directed the school's Conflict Management and African Studies programs. He holds the Jacob Blaustein Chair in International Organizations and Conflict Resolution. He is a founder and current Board Chairman of the International Peace and Security Institute (IPSI).