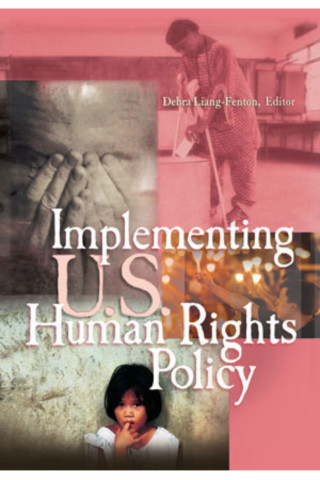 Since the 1970s, the promotion of human rights has been an explicit goal of U.S. foreign policy. Successive presidents have joined with senators and representatives, hundreds of NGOs, and millions of ordinary citizens in deploring human rights abuses and urging that American power and influence be used to right such wrongs. Vigorous debates, bold declarations, and well-crafted legislation have shaped numerous policies designed to counter abuses and promote U.S. values across the globe.

But have such policies actually worked?

This incomparable volume answers that question by spotlighting no fewer than 14 cases spanning four continents and 25 years. In each case, a distinguished author charts efforts to implement U.S. policy and highlights the problems encountered. The chapters explore the interaction between competing moral, economic, and security considerations; examine the different challenges facing policymakers in Washington and practitioners in-country; and assess what worked, what did not work, and why. Throughout, the emphasis is on discovering useful lessons and offering practical advice to those considering new initiatives or trying to improve existing efforts.

The stated objective of American foreign policy is to help make the 21st Century the Century of Democracy and Human Dignity. How realistic is that aim? How effective will those opponents be whose power is thereby threatened and who will resist that objective? How determined and consistent will we be as we face those who resist and retaliate with violence? This volume should help us understand where we are on the way to our goal and what obstacles still lie in our way.

Max M. Kampelman, Ambassador and Former Head of the U.S. Delegation to the Conference on Security and Cooperation in Europe; Chairman Emeritus, Freedom House

As the United States continues to wage the War on Terrorism, it is imperative that we understand these serious new challenges within the context of our larger fight for global human rights. Implementing U.S. Human Rights Policy underscores the United States' paramount commitment to fighting for the values of human rights. Providing a wide range of different opinions on how these sacred values ought to be defended through our foreign policy, Implementing U.S. Human Rights Policy is a truly significant contribution in this crucial national debate.

Implementing U.S. Human Rights Policy turns the spotlight on the United States' mixed record of promoting human rights throughout the world. The cases explored in this volume will prompt sober reflection and perhaps some regret for missed opportunities. However, they also will inspire pride in America's abiding commitment to the cause of human rights and hope that the United States can play a robust role as a champion of freedom even more effectively in the future.