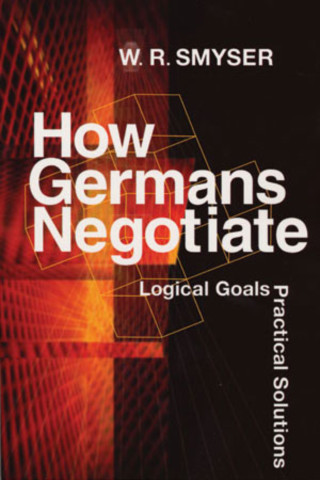 Drawing on interviews with dozens of European and American negotiators, How Germans Negotiate explores the roots of contemporary German negotiating behavior and identifies the stages through which negotiations typically pass. Using examples drawn from the past 50 years, Smyser illustrates Germany's abiding search for security, stability, and community. Germans are usually willing to make a mutually beneficial deal, but not before they've undertaken exhaustive research, presented a meticulous case, and satisfied their own demands for conceptual consistency.

A separate chapter focuses on business and economic negotiations, which can be very different from diplomatic encounters. Smyser investigates a variety of recent cases, including discussions on global monetary policy and the Daimler-Chrysler talks, and discovers a tension between a traditional "old" style and a more predatory "new" style. The conclusion lays out basic strategies and tactical pointers and explains how to avoid mistakes.

This groundbreaking book analyzes and interprets German negotiating behavior, offering a refreshingly unconventional explanation of its historical origins and an excellent as well as thorough study of the post–World War II conduct of negotiations typical for Germany's diplomacy and business.

A must read for Americans and others looking for winning strategies in negotiations with Germans.

Very useful for Germans who want to understand how their American counterparts think and act.

W.R. Smyser was a historian of modern Germany who also served as a Foreign Service officer, member of Henry Kissinger’s National Security Council staff, and deputy high commissioner for refugees at the United Nations. Germany exerted a magnetic pull on Dr. Smyser, who spent time in the country as a young man, served there in the Army, held diplomatic postings in Berlin and Bonn, and eventually wrote one of the first comprehensive accounts of its political evolution after World War II — From Yalta to Berlin: The Cold War Struggle Over Germany (1999).