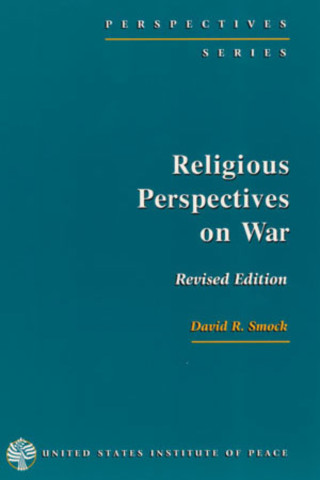 If, when, why, and how to fight a war? In the case of the Gulf War, that debate encompassed three faiths–Christianity, Islam, and Judaism–and the debate has acquired new dimensions in the aftermath of the September 11 attacks and the war on terrorism.

In this volume, Jews, Muslims, and Christians with very diverse views address such issues as the just war doctrine, explaining their differences and finding often surprising common ground. This new edition reprints the full text of the first edition. A new preface describes the differences and similarities between the Gulf War and the war against al Qaeda/Taliban. Also included is an introduction explaining the just war doctrine, a glossary of terms, and an expanded and updated "Suggestions for Further Reading."

David R. Smock is vice president of the Institute's Center for Mediation and Conflict Resolution and associate vice president of the Religion and Peacemaking program, one of the Centers of Innovation. Previously he served as director of the USIP's Grant program and coordinator of Africa activities. He has worked on African issues for over thirty years and lived in Africa for eleven years. As a staff member of the Ford Foundation from 1964 to 1980, he served in Ghana, Kenya, Lebanon, Nigeria, and New York. From 1980 to 1986, Smock served concurrently as director of the South African Education Program, a scholarship program that brings black South African students to U.S. universities, and vice president for program development and research for the Institute of International Education. After serving as executive associate to the president of the United Church of Christ from 1986 to 1989, Smock became executive director of International Voluntary Services, supervising development projects in Africa, Asia, and Latin America. He is editor of Interfaith Dialogue and Peacebuilding, Making War and Waging Peace: Foreign Intervention in Africa, and co-editor of African Conflict Resolution: The U.S. Role in Peacemaking. He received a Ph.D. in anthropology from Cornell University and holds an M.Div. from New York Theological Seminary.