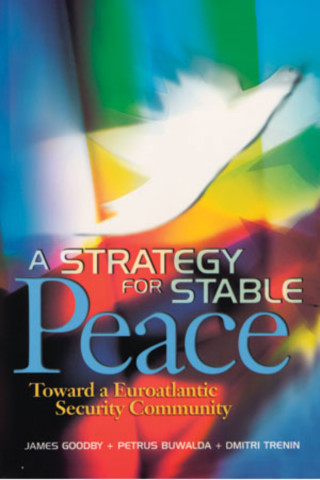 A Strategy for Stable Peace

"The United States, Russia, and all the nations of Europe could eliminate war as a means of settling disputes among themselves. It will not be easy but it is within their reach.” Thus begins this bold and yet pragmatic argument for creating a security community that runs from Vancouver to Vladivostock.

In A Strategy for Stable Peace, three eminent diplomats and scholars from Europe and the United States urge us to make the new decade a turning point in history. In place of the wars and near-wars that have plagued Euroatlantic relations over centuries, close and enduring cooperation can gradually be built on the basis of shared interests and common values.

After first outlining the concept of stable peace, the volume describes the current political, economic, and security climates within Russia, the European Union, and the United States, and then assesses various models before recommending a strategy for achieving a stable peace. Drawing on their extensive experience, the authors recommend a series of concrete, practicable policies, both long- and near-term, that the leaders of their nations can adopt.

Petrus Buwalda, Dutch diplomat and author, was ambassador to Egypt, Sweden, and the Soviet Union and served at NATO headquarters and in Washington, D.C.

Dmitri Trenin, director of the Carnegie Moscow Center, has been with the center since its inception. He also chairs the research council and the Foreign and Security Policy Program.

He served in the Soviet and Russian armed forces from 1972 to 1993, including experience working as a liaison officer in the external relations branch of the Group of Soviet Forces (stationed in Potsdam) and as a staff member of the delegation to the U.S.-Soviet nuclear arms talks in Geneva from 1985 to 1991. He also taught at the War Studies Department of the Military Institute from 1986 to 1993.

James E. Goodby has served in the US Foreign Service, achieving the rank of Career Minister, and was appointed to five ambassadorial-rank positions by Presidents Carter, Reagan, and Clinton, including ambassador to Finland. He taught at Georgetown, Syracuse, and Carnegie Mellon Universities and is Distinguished Service Professor Emeritus at Carnegie Mellon. Ambassador Goodby has worked with former Secretary of State George Shultz at Hoover since 2007. He is a research fellow at the Hoover Institution. Goodby’s awards include the Presidential Distinguished Service Award, the State Department’s Superior and Distinguished Honor Awards, and the Commander’s Cross of the Order of Merit of Germany. He was named a Distinguished Fellow of the US Institute of Peace in 1992. He was the recipient of the inaugural Heinz Award in Public Policy in 1995. In 1996, he was awarded an honorary doctor of laws degree by the Stetson University College of Law.

He was a Distinguished Service Professor at Carnegie Mellon University from 1989 to 1999 and is now a professor emeritus. Selected for the US Foreign Service through competitive examinations in 1952, Goodby rose to the rank of career minister in the Senior Foreign Service and was given five presidential appointments to ambassadorial rank, including ambassador to Finland (1980–81). During his Foreign Service career he was involved as a negotiator or as a policy adviser in the creation of the International Atomic Energy Agency, the negotiation of the limited nuclear test ban treaty, START, the Conference on Disarmament in Europe, and cooperative threat reduction (the Nunn-Lugar program).