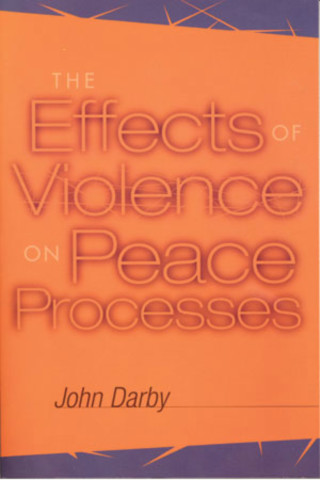 The Effects of Violence on Peace Processes

As recent events demonstrate, violence, especially ethnic violence, is exceptionally hard to extinguish. Cease-fires almost never bring a complete end to the killing, and formal peace agreements are more often than not undone by men unwilling to forsake the gun. As John Darby argues in this original, holistic, and comparative treatment of the subject, “even when political violence is ended by a cease-fire, it reappears in other forms to threaten the evolving peace process.”

Unlike most scholars, Darby focuses on peace processes that have involved actors other than the United Nations. He analyzes the nature and impact of four interrelated kinds of violence: violence by the state, violence by militants, violence in the community, and the emergence of new violence-related issues during negotiations. For each kind of violence, the author draws out the policy implications, suggesting how the “guardians” of the peace process can defeat would-be spoilers and change a culture of violence. The volume concludes by distilling five propositions on the relationship between violence and peace processes.

An expert in peace processes, John Darby directed the Kroc Institute’s Research Initiative for the Resolution of Ethnic Conflict from 2002-06 and the Peace Accords Matrix since 2004. Prior to joining the Kroc Institute, he taught at the University of Ulster and founded and directed INCORE (Initiative on Conflict Resolution and Ethnicity), a joint program of the University of Ulster and the United Nations University, Tokyo. Educated at Queens University in Belfast and the University of Ulster, he held visiting positions in Harvard and Duke Universities and served as a fellow of the Rockefeller Foundation in Bellagio, the Woodrow Wilson Center in Washington, the United States Institute of Peace, and the Fulbright New Century Scholars Program. He is the author or editor of 15 books and 120 other academic publications in international conflict and peace processes.