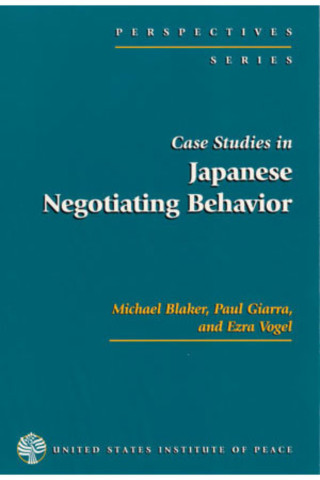 Japanese representatives bring to the negotiating table a distinctive mind-set and behavioral style, one that’s largely free of gamesmanship and histrionics but that’s nonetheless frequently exasperating.

This volume explores four recent U.S.–Japanese negotiations—two over trade, two over security-related issues—looking for patterns in Japan’s approach and behavior. In the first three cases, veteran Japanologist Michael Blaker finds the same fundamental style—coping. “Coping captures the go-with-the-flow essence of the Japanese bargaining approach”: cautious, methodical, low key, resistant, apprehensive, and above all defensive. In the fourth case, Ezra Vogel and Paul Giarra recount how the United States and Japan fashioned a new security framework for their relationship in the 1990s. Vogel and Giarra show that close personal relationships, mutual trust, and a common purpose can foster flexible, fast, and fruitful negotiations.

Each case study explains the cultural as well as political, institutional, and personal factors and assesses their influence. A concluding chapter draws out common threads from the four studies, suggests how U.S. negotiators can maximize negotiating efficacy, and points the way toward a new and clearer understanding of Japanese bargaining behavior.

Michael Blaker has taught at several major universities and authored numerous publications, including The Politics of Trade.

Ezra F. Vogel is the Henry Ford II Professor of the Social Sciences Emeritus at Harvard. After graduating from Ohio Wesleyan in 1950 and serving two years in the U.S. Army, he studied sociology in the Department of Social Relations at Harvard, receiving his Ph.D. in 1958. He then went to Japan for two years to study the Japanese language and conduct research interviews with middle-class families. In 1960-1961 he was assistant professor at Yale University and from 1961-1964 a post-doctoral fellow at Harvard, studying Chinese language and history. He remained at Harvard, becoming lecturer in 1964 and, in 1967, professor. He retired from teaching on June 30, 2000.

Drawing on his original field work in Japan, he wrote Japan's New Middle Class (1963). A book based on several years of interviewing and reading materials from China, Canton Under Communism (1969), won the Harvard University Press faculty book of the year award. The Japanese edition of his book Japan as Number One: Lessons for America (1979) is the all-time best-seller in Japan of non-fiction by a Western author. In Comeback (1988), he suggested things America might do to respond to the Japanese challenge. He spent eight months in 1987, at the invitation of the Guangdong Provincial Government, studying the economic and social progress of the province since it took the lead in pioneering economic reform in 1978. The results are reported in One Step Ahead in China: Guangdong Under Reform (1989). His Reischauer Lectures were published in The Four Little Dragons: The Spread of Industrialization in East Asia (1991). His most recent publication is Is Japan Still Number One? (2000). He has visited East Asia every summer since 1958 and has spent a total of over six years in Asia.

Vogel has received honorary degrees from Kwansei Gakuin (Japan), the Monterrey Institute, the Universities of Maryland, Massachusetts (Lowell), Wittenberg, Bowling Green, Albion, Ohio Wesleyan, Chinese University (Hong Kong) and Yamaguchi University (Japan). He received The Japan Foundation Prize in 1996 and the Japan Society Prize in 1998. He has lectured frequently in Asia, in both Chinese and Japanese.

Paul Giarra is the President of Global Strategies & Transformation, a national defense and strategic planning consultancy.