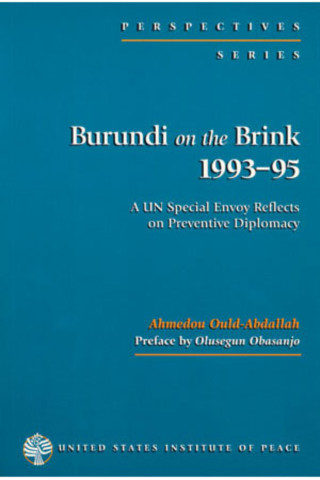 Ambassador Ould-Abdallah arrived in Burundi with a mandate from the United Nations to rescue the country's fledgling democracy and bring together political and ethnic rivals. His original mandate was for three months; he stayed two years. When he left, Burundi was by no means tranquil, but his efforts to foster political power sharing and to rein in extremism had done much to avert all-out civil war and to save Burundi from the genocidal fate of neighboring Rwanda.

In Burundi on the Brink, Ould-Abdallah pulls no punches as he describes the challenges he faced—not only from Burundians but also from members of the international community. He is equally revealing about how he sought to boost the limited leverage available to a UN special envoy by bold action, personal example, and close coordination with the local, diplomatic, and NGO communities.

The volume concludes with a stimulating, often unconventional analysis of what Burundi tells us about what does and what doesn't work in the practical realm of preventive diplomacy.

Ahmedou Ould-Abdallah is executive secretary of the Global Coalition for Africa. A former member of the Mauritanian cabinet and ambassador to the United States and European Union, he headed African economic affairs at the United Nations for six years. He was a grantee of the United States Institute of Peace in 1996–97.