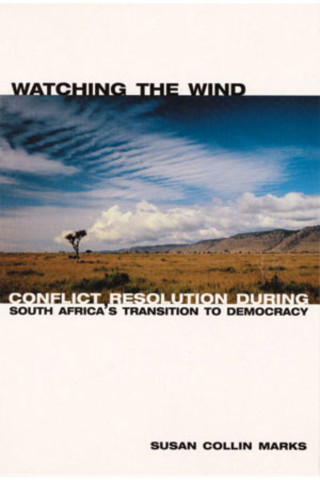 A compelling, inspiring account of peacemaking in action, Watching the Wind takes us to the front lines of South Africa's struggle to manage the tempestuous transition from apartheid to democracy.

When Mandela, de Klerk, and other political leaders launched the 1991 National Peace Accord in a far-reaching effort to staunch political bloodshed and promote consultation and cooperation between bitter adversaries, Susan Collin Marks was one of thousands of South Africans who committed themselves to making the peace process work where it mattered most—at the local level. Over the next three years, Marks and other leaders of the conflict resolution movement adopted and adapted a vast array of tools and techniques: they mediated, facilitated, and counseled; they created forums for open discussion and trained community leaders; they fostered community policing; and they anticipated crises and stood between demonstrators and security forces.

And, as Marks explains, “something extraordinary happened.” The international community had expected a bloodbath, but what it saw instead was a near-miraculous process of negotiation and accommodation. With passion and eloquence, the author captures the drama, the personalities, and the heroism of this grassroots peace process.

Susan Collin Marks is an internationally renowned peacemaker and peacebuilder. She has worked in some of the most conflictual places on the planet, mediating in the heart of her native South Africa’s transition from apartheid to democracy; facilitating ongoing dialogue in the Middle East between Palestinians and Israelis, Iranians and Americans, Syrians and Americans, within Libya, and multilaterally throughout the region; supporting peace initiatives in the former Soviet Union and Asia; and establishing peacebuilding programs throughout Africa. In recent years, she focused on mentoring and counseling high level political, institutional and civil society leaders worldwide, including cabinet ministers, military generals, and members of the US Congress. In September 2014, she stepped aside after 20 years as vice president of Search for Common Ground, the largest peacebuilding NGO in the world, and moved from Washington DC to Europe. Search for Common Ground was nominated for the Nobel Peace Prize in 2018.

She holds an MA in International Relations from the U. of Kent at Canterbury. Honors include an Honorary Doctorate from the UN University for Peace; Jennings Randolph Peace Fellowship at the United States Institute for Peace; Skoll Award for Social Entrepreneurship; President Jimmy Carter’s Waging Peace Award; Marvin Johnson Diversity Award from the Association for Conflict Resolution; Exemplary Leadership Award from the University of Pittsburgh; the Institute for Noetic Science’s Creative Altruism Award.