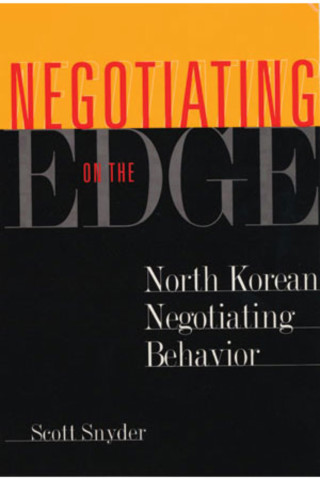 Negotiating on the Edge

The ordeal of negotiating with North Koreans during the Cold War has left the impression of a “crazy” and “bizarre” diplomacy, of negotiators who insult and provoke their Western counterparts while fabricating crises and fomenting discord. As Negotiating on the Edge reveals, however, there is not only a method to this “madness” but also an ongoing shift toward a less provocative negotiating style.

Drawing on interviews with an eminent cast of U.S. officials and marshalling extensive research on North Korea past and present, Scott Snyder traces the historical and cultural roots of North Korea's negotiating behavior and exposes the full range of tactics in its diplomatic arsenal. He explains why North Koreans behave as they do, and he argues that there is, in fact, an internal logic to what often seems to be outrageous conduct.

Finally, Snyder explores how economic desperation and the end of the Cold War have forced North Korea to modify its negotiating style and objectives. Focusing on the U.S. negotiating experience with North Korea in the 1990s, Snyder also deals comparatively with recent South Korean and multilateral attempts to engage Pyongyang.

The best, and perhaps the only full fledged, analysis of North Korean negotiating behavior and . . . an indispensable manual for those who have the tough luck of negotiating with the North Koreans or others, if any, who are like them.

Scott A. Snyder is senior fellow for Korea studies and director of the program on U.S.-Korea policy at the Council on Foreign Relations (CFR). His program examines South Korea’s efforts to contribute on the international stage; its potential influence and contributions as a middle power in East Asia; and the peninsular, regional, and global implications of North Korean instability. Mr. Snyder is the author of South Korea at the Crossroads: Autonomy and Alliance in an Era of Rival Powers (January 2018) and coauthor of The Japan-South Korea Identity Clash: East Asian Security and the United States (May 2015) with Brad Glosserman. He is also the coeditor of North Korea in Transition: Politics, Economy, and Society (October 2012), and the editor of Global Korea: South Korea’s Contributions to International Security (October 2012) and The U.S.-South Korea Alliance: Meeting New Security Challenges (March 2012). Mr. Snyder served as the project director for CFR’s Independent Task Force on policy toward the Korean Peninsula. He currently writes for the blog Asia Unbound.