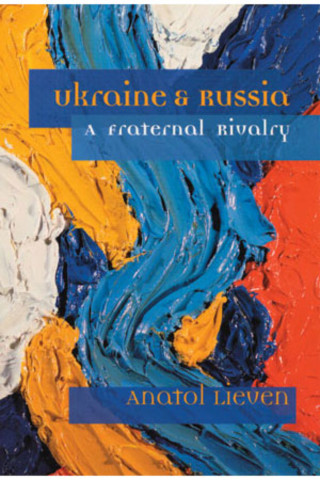 Journalist Anatol Lieven here explores the complex ethnic and political relationship of Ukraine and Russia. Based on extensive interviews, Lieven provides a fascinating portrait of the diversity that is contemporary Ukraine and of its efforts to forge a national identity after three centuries of Russian rule.

Lieven’s journeys take him into ethnic Russian enclaves in Crimea and eastern Ukraine and to the western bastions of Ukrainian nationalism. But they also reveal an intermingling (and intermarriage) of both ethnic groups throughout much of the country.

With trenchant observations and an eye for the telling detail, Lieven examines the policy implications of Eastern Europe’s new political geography. Will ethnic coexistence endure in the face of economic hardship and the divisive issues left over from the Soviet era? Is it wise for the West to force the issue of Ukraine’s membership in Western institutions—NATO first and foremost among them?

Anatol Lieven is a professor at Georgetown University in Qatar. Lieven’s last position was as chair of international relations and terrorism studies in the War Studies Department at King’s College London. He is also a senior fellow of the New America Foundation in Washington DC. His areas of expertise include Islamist terrorism and insurgency; contemporary warfare; US and Western strategy; the countries of the former Soviet Union; and the Greater Middle East, especially Pakistan, Afghanistan and Iran. His latest book, Pakistan: A Hard Country was published in April 2011 by Penguin in the UK and Public Affairs in the US. From 2000-2007 Anatol Lieven worked in Washington DC first as a senior associate of the Carnegie Endowment for International Peace, and then as a senior research fellow at the New America Foundation. During this period he wrote Ethical Realism: A Vision for America’s Role in the World (co-authored with John Hulsman, published in September 2006 by Pantheon) and America Right or Wrong: An Anatomy of American Nationalism (Oxford University Press and Harper Collins, 2004, republished in an updated and expanded new edition, 2012). From 1986 to 1998 he worked as a British journalist in South Asia and the former Soviet Union (chiefly for The Times), and is author of several books on the latter region, including The Baltic Revolution: Estonia, Latvia, Lithuania and the Path to Independence (Yale University Press 1993), Chechnya: Tombstone of Russian Power? (Yale University Press 1998), and Ukraine and Russia: A Fraternal Rivalry (US Institute of Peace, 1999). The Baltic Revolution won the George Orwell Prize for Political Writing and the Yale University Press Governor’s Award in 1993. Anatol Lieven frequently writes for the international media. He has testified before committees and sub-committees of the US Congress and the British parliament, has briefed the Brtish government on Afghanistan and Pakistan, and has spoken on numerous occasions at the British Foreign and Commonwealth Office, the US Department of State, and the French Foreign Ministry, as well as at a wide range of U.S, European, Russian and Chinese universities and institutes. Anatol Lieven holds a BA in history (double first) and a PhD in political science from the University of Cambridge, Great Britain.