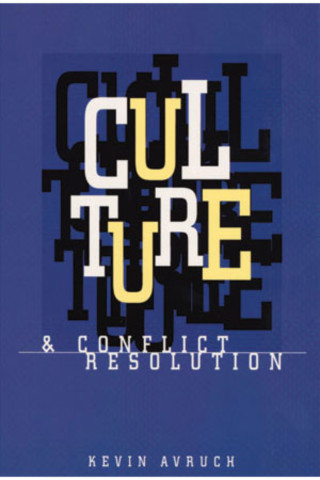 After years of relative neglect, culture is finally receiving due recognition as a key factor in the evolution and resolution of conflicts. Unfortunately, however, when theorists and practitioners of conflict resolution speak of “culture,” they often understand and use it in a bewildering and unhelpful variety of ways. With sophistication and lucidity, Culture and Conflict Resolution exposes these shortcomings and proposes an alternative conception in which culture is seen as dynamic and derivative of individual experience. The book explores divergent theories of social conflict and differing strategies that shape the conduct of diplomacy, and examines the role that culture has (and has not) played in conflict resolution.

Kevin Avruch is the Henry Hart Rice Professor of Conflict Resolution and Professor of Anthropology at the School for Conflict Analysis and Resolution, and faculty and senior fellow in the Peace Operations Policy Program (School of Public Policy), at George Mason University. Avruch was the Dean of S-CAR from 2013 to 2019.He received his A.B. from the University of Chicago and M.A. and Ph.D. from the University of California at San Diego. He has taught at UCSD, the University of Illinois at Chicago and, since 1980, at GMU, where he served as Coordinator of the Anthropology Program in the Department of Sociology and Anthropology from 1990-1996. From 2005 to 2008, he served as Associate Director of S-CAR.