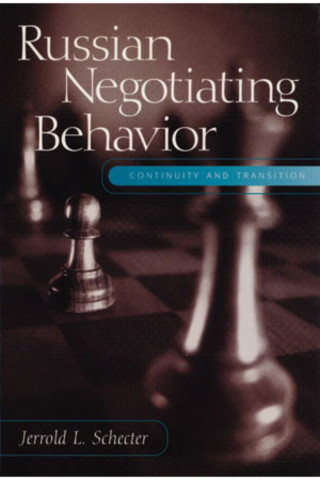 Whether bargaining for strategic arms reductions, rights to drill Siberian oil fields, or an apartment in Moscow, Americans are faced across the table by a distinct Russian negotiating style. What are its chief characteristics, and how can U.S. diplomats and businesspeople best deal with it as they pursue their own objectives?

Jerrold Schecter explores these questions with a wealth of personal experience as a former government official, journalist, and corporate executive. His insights, deepened by his working knowledge of the Russian language, also draw on the testimony of U.S. and former Soviet diplomats and negotiators. As he examines the historical and cultural underpinnings of contemporary Russian negotiating behavior, Schecter finds that the Bolshevik legacy remains largely intact despite the Soviet Union's demise. A step-by-step examination of the negotiating process, based on unique inside accounts from retired Soviet officials, exposes the areas of greatest continuity in Russian interests and style, as well as areas of change.

Russian Negotiating Behavior also identifies counterstrategies that western negotiators can use to protect their interests, and it outlines the requirements for doing business in Russia's nascent market economy.

Jerrold L. Schecter's firsthand experience in Russia began in 1968, when he became Time magazine's Moscow bureau chief. During the Carter administration he participated in negotiations with the Soviets as a member of the National Security Council staff. He has since visited Russia frequently, and in the early 1990s he helped establish a U.S.-Russian joint-venture newspaper. Schecter was instrumental in the acquisition of Nikita Khrushchev's memoirs and has written five books about the Soviet Union.