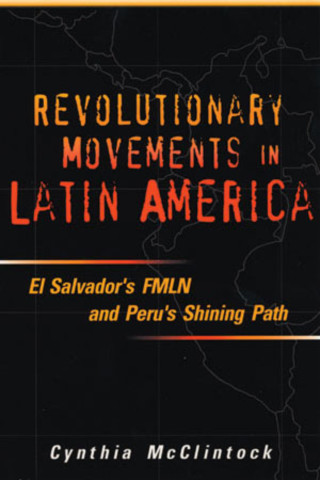 Why were El Salvador's FMLN and Peru's Shining Path able to mount such serious revolutionary challenges in the 1980s and early 1990s? And why were they able to do so despite the fact that their countries' elected governments were widely considered democratic? These two guerrilla groups were very different, but both came close to success. To explain why, the author examines the complex interplay among political and economic factors, the nature of the revolutionary organization, and international actors. McClintock emphasizes that the end of the Cold War does not mean the end of revolutionary groups, and that the United States can play an important role in determining the outcome of future confrontations. The book concludes with practical policy options for the U.S. government as it looks to foster peace and democracy in the western hemisphere.

A spectacularly strong piece on a vitally important issue. Since these issues are so often treated in politically tendentious ways, it is a rare treat to find someone doing it so well. Someone once said that, when Aretha Franklin did a song, it stayed done. Likewise, now, with Professor McClintock's work.

Cynthia McClintock is Professor of Political Science and International Affairs at George Washington University. She holds the B.A. degree from Harvard University and the Ph.D. from the Massachusetts Institute of Technology.

Dr. McClintock was President of the Latin American Studies Association in 1994-95. Also, she was a member of the Council of the American Political Science Association in 1998-2000, and served as the Chair of its Comparative Democratization Section in 2003-05.

During 2006-2007, Prof. McClintock was a Fellow at the Woodrow Wilson International Center for Scholars. Based on her research at the Center, she is writing a book on the implications for democracy of runoff versus plurality rules for the election of the president in Latin America.