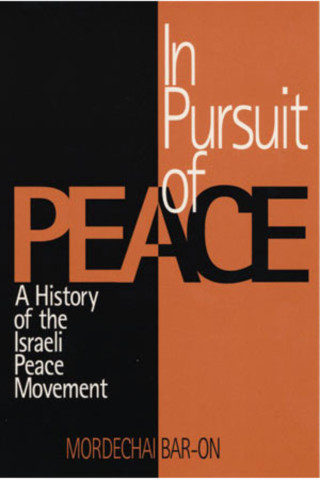 In Pursuit of Peace

When the Israeli prime minister and the PLO chairman shook hands on the White House lawn in 1993, Israeli peace activists had good reason to celebrate this major step on the long road to peace.

This book tells the story of the Israeli peace movement and the role it played in that pursuit of peace. It is an eloquent, fascinating account of a remarkably diverse and determined cast of activists: from war-weary soldiers to hard-headed politicians, careful scholars to impassioned artists.

Drawing on his experience in the peace movement, Bar-On provides intimate portraits of groups like Peace Now, Yesh Gvul, and the Women in Black, he also provides a sweeping historical synthesis of the course of the Israeli-Arab conflict, especially between 1967 and 1993.

There can hardly be a better person to record and analyse the history of Israel's peace movement than Mordechai Bar-On, who combines a rigorous academic discipline with first-hand experience and knowledge of the movement from the inside. . . . His treatment of the subject is well-documented, comprehensive, engaging, and lucid. It will certainly serve as the best resource on the subject to be published so far.

This is a grant tour-de-force and a first-rate analysis of the Israeli peace movement. Bar-On's treatment of the subject is well documented, comprehensive, engaging, and lucid - the best resource on the subject so far.

The title indicates the book’s twofold aim: to write the history of the Israeli peace movement and to demonstrate that it is a work in progress with no assurance that the pursuit of peace will succeed. . . . Bar-On presents an extraordinarily balanced, comprehensive, and lucid treatment, the best resource on the subject so far.

Presented with clarity, forthrightness and a real attempt to lean over backwards for the sake of objectivity. . . . The book has been described by Shulamit Aloni as the best resource on the subject so far, and praised by Uri Avneri and Lyova Eliav on the Israeli side, and Faisal Husseini on the Palestinian side. Indeed, Pursuit does appear to be an almost day-by-day account of virtually everything political that has happened in Israel in more recent years, though its analytical scope take in half a century.

Mordechai Bar-On served as Moshe Dayan's bureau chief in the 1950's, chief education officer of the Israeli Defense Forces in the 1960's, a leader of the World Zionist Organization in the 1970's, and a member of the Knesset and Peace Now activist in the 1980's. He received his doctorate from the Hebrew University of Jerusalem and was a fellow at the U.S. Institute of Peace in 1992-93.