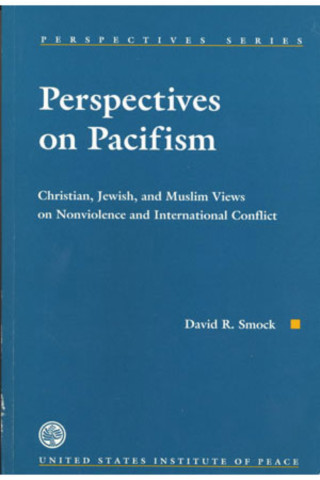 In this Perspectives Series volume, the United States Institute of Peace brings together Christian, Jewish, and Muslim theologians and activists to debate the role of nonviolence in peacemaking and conflict resolution, yielding rare insight into the complexities of modern religious thought on justice and peace.

David R. Smock is vice president of the Institute's Center for Mediation and Conflict Resolution and associate vice president of the Religion and Peacemaking program, one of the Centers of Innovation. Previously he served as director of the USIP's Grant program and coordinator of Africa activities. He has worked on African issues for over thirty years and lived in Africa for eleven years. As a staff member of the Ford Foundation from 1964 to 1980, he served in Ghana, Kenya, Lebanon, Nigeria, and New York. From 1980 to 1986, Smock served concurrently as director of the South African Education Program, a scholarship program that brings black South African students to U.S. universities, and vice president for program development and research for the Institute of International Education. After serving as executive associate to the president of the United Church of Christ from 1986 to 1989, Smock became executive director of International Voluntary Services, supervising development projects in Africa, Asia, and Latin America. He is editor of Interfaith Dialogue and Peacebuilding, Making War and Waging Peace: Foreign Intervention in Africa, and co-editor of African Conflict Resolution: The U.S. Role in Peacemaking. He received a Ph.D. in anthropology from Cornell University and holds an M.Div. from New York Theological Seminary.