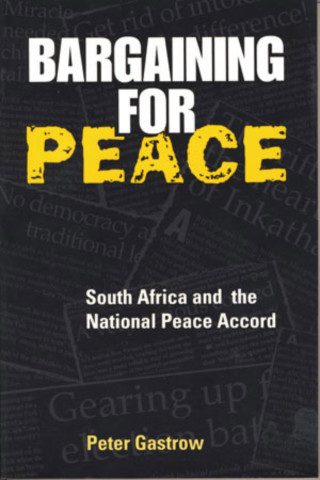 Gastrow describes the initiatives and events that led to the signing of the accord, exploring in particular the important roles played by religious groups and the business community.

Peter Gastrow is Senior Advisor at the Global Initiative Against Transnational Organized Crime. studied economics and law in South Africa and worked in the office of the Attorney General before establishing his own legal practice as an advocate of the Supreme Court. He was a member of the South African parliament, served on the National Peace Committee, and chaired the transitional government structure responsible for providing safety and stability during the first democratic elections in South Africa in 1994. After the 1994 elections, he became special adviser to the Minister for Safety and Security to assist with the transformation of South Africa’s police agencies. Between 1998 and 2009 he was the Cape Town director of the Institute for Security Studies (ISS), an independent policy research institute. During 1999 and 2000 he served on the South African delegation at the two-year negotiation process in Vienna that led to the adoption of the UN Convention against Transnational Organized Crime. In 2009 he joined the International Peace Institute (IPI) in New York as a Senior Fellow and Director of Programs, focusing on transnational organized crime. He has served on a number of UN Expert Groups, on the World Economic Forum’s Global Agenda Council on Organized Crime, and was appointed by the Kenyan government as vice chairman of their National Task Force on Police Reform. While based in New York he was involved in establishing the ‘Global Initiative against Transnational Organized Crime’, which has become an independent initiative aimed at reshaping thinking, strategies and responses to international organized crime. He is based in Cape Town and has published widely on issues relating to organized crime, peace and conflict, transition, governance, and policing.