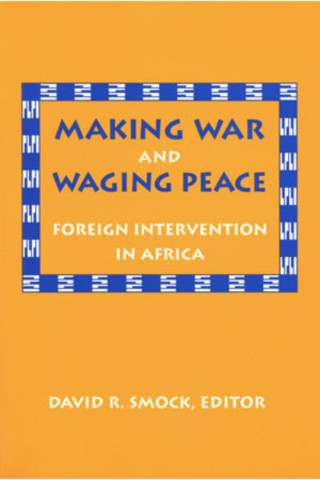 During the past decade or so, Africa has been beset by an extraordinarily high number of wars. Indeed, some two to three million people died because of Africa’s warefare in the 1980’s alone.

That heavy burden of war, most of it originating internally, has been accompanied by frequent external involvement, both in terms of military intervention and through efforts to promote conflict resolution, usually by mediation.

This volume focuses on the role and effectiveness of external intervention in sub-Saharan Africa, primarily during the 1980’s. The authors include a range of Western and African scholars and policymakers with extensive experience in Africa.

The richly detailed case studies examine Angola and Namibia, Ethiopia and Eritrea, Mozambique, and Sudan. Additional essays assess the role of the OAU and summarize French, British, and Belgium military involvement. An afterword by former diplomat Chester Crocker offers several guidelines for promoting peace-making and peacekeeping on the African continent in the future.

The volume. . . does provide a wealth of good case study material, most notably as regards Sudan, Angola, Mozambique, and Ethiopia

This is a very useful collection that advances our understanding of an important issue, albeit incrementally. Its low price should make it accessible to both policymakers and academics and encourage classroom adoptions.