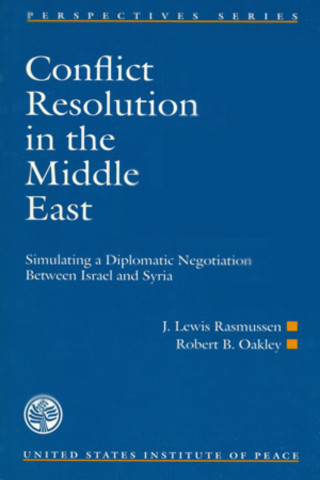 Conflict Resolution in the Middle East

Simulating a Diplomatic Negotiation Between Israel and Syria
J. Lewis Rasmussen and Robert B. Oakley
Paperback
9781878379191
72 Pages
$10.00
Add to Cart

Shortly before the Middle East peace talks began in November 1991, the United States Institute of Peace conducted a four-day simulation of what was about to unfold in the diplomatic dialogue between two enemy countries, Israel and Syria, whose representatives had never before sat together.

Dr. Lewis Rasmussen is Director of Corporate Relations, Strategy, and Proposals for Tetra Tech PRT. In addition, as part of the Tetra Tech International Development Services group, he also serves as Director, Development Assistance, Stabilization and Reconstruction and as a member of the Business Development Committee. He brings 25 years of experience related to good governance, security sector strengthening, rule of law, and conflict prevention and transformation. An accomplished trainer, facilitator, and program manager, he was an early staffer at the US Institute of Peace (1988 – 2000), where his contributions include having founded and helped run the professional conflict resolution education and training, police assistance, and the military fellows programs, as well as regularly providing public speaking, research, and writing services. As director of the Center for International Peace and Justice, a division of Policy Studies Inc. (2001-2003), Lewis managed various rule of law, governance, and peacebuilding projects, including having provided assistance to USAID on developing the agency’s police assistance strategy and policy, and led workshops and prepared reports on how to enhance USAID’s military relations. From 2004 to present, his Tetra Tech responsibilities include business development, project management, and technical expertise on a wide range of US government foreign assistance efforts. One of Dr. Rasmussen’s responsibilities is to help win and manage large USAID, Department of State, and Department of Defense contracts related to conflict, security, and stability. He further helps coordinate the integration of Tetra Tech’s multi-sectoral capacities and apply these services in pursuit of conflict prevention, security sector strengthening and stabilization objectives. Lewis holds a Ph.D. in international relations and peace and conflict resolution from The American University, and has published on the same topics. In addition to now serving a Co-Chair of the SID Security and Development Working Group, Dr. Rasmussen serves as a founding Co-Chair of the Stability, Security, Transition & Reconstruction Division of the National Defense Industrial Association.

Robert B. Oakley was U.S. special envoy to Somalia under President Bush and Clinton. Previously, he was coordinator of the Institute's Middle East program.