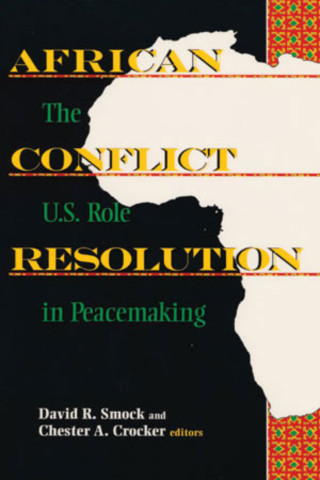 When Somali gunmen killed 18 American Rangers in Mogadishu on October 3, 1993, public and congressional support for the American and UN missions in Somalia dropped dramatically. In fact, U.S. policymakers began to rethink commitments to peacemaking in Africa in general.

Nevertheless, many African and U.S. specialists on African affairs--including the contributors to this volume--strongly urge the United States to continue active engagement with Africa and creatively support African initiatives to manage and resolve their own conflicts.

This book brings together nine specialists from Africa and the United States--including former diplomats, academics, policymakers, and policy analysts--to assess ways to enhance the U.S. contribution to African efforts to prevent, manage, and resolve violent conflicts.

The contributors conclude that U.S. initiatives can take a variety of forms and need not involve American troops. There is a new African willingness to assume responsibility, but African instutional and fanancial capabilities are severely limited. African initiatives therefore have little chance of success without significant and sustained international, and particularly American involvement.

An overview of America's actions and options in promoting peace in Africa. The contributors propose building the capacity of Africans . . . to prevent and resolve conflicts, with practical suggestions for diplomatic action, training, logistical backup, and institutional support.