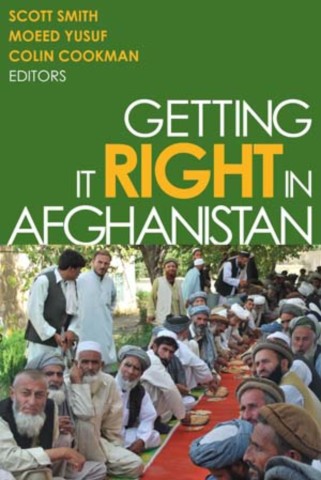 Getting It Right in Afghanistan

Building an enduring and stable political consensus in Afghanistan's complex, multiactor environment requires clear analysis of the conflict. Getting It Right in Afghanistan addresses the real drivers of the insurgency, how Afghanistan's neighbors can contribute to peace in the region, and the need for more inclusive political arrangements in peace and reconciliation processes.

Scott Smith is the deputy director for USIP's Afghanistan program. Formerly at the United Nations, he is the author of Afghanistan's Troubled Transition: Politics, Peacekeeping and the 2004 Presidential Election.

Moeed Yusuf serves as the National Security Advisor to the Prime Minister of Pakistan in the capacity of an Assistant to the Prime Minister of Pakistan on National Security Division and Strategic Policy Planning. He previously served as the director of South Asia programs at USIP. He has taught at Boston University and Quaid-e-Azam University, Pakistan and has previously been affiliated with the Brookings Institution and the Harvard Kennedy School.

Colin Cookman is a program officer with the U.S. Institute of Peace's Center for South and Central Asia, working to help support, manage and coordinate research publications across the program's region of focus. He joined the staff in June 2014, after previously working on a part-time basis to support USIP research on Pakistan beginning in February 2013. Colin has previously worked as a contributing writer for the Economist Intelligence Unit's political risk and macroeconomic analyses of Pakistan and Afghanistan, and was a member of Democracy International's election observation mission during the 2010 Afghan parliamentary elections. From 2008 through 2013, Colin worked as an analyst with the Center for American Progress' national security and international policy team, focusing on the internal political and conflict dynamics of Afghanistan and Pakistan, and American policy towards the region. Colin received his graduate degree from John Hopkins University’s School of Advanced International Studies in 2014, with a concentration in South Asia studies and International Economics, and his undergraduate degree in International Relations from Boston University in 2005.