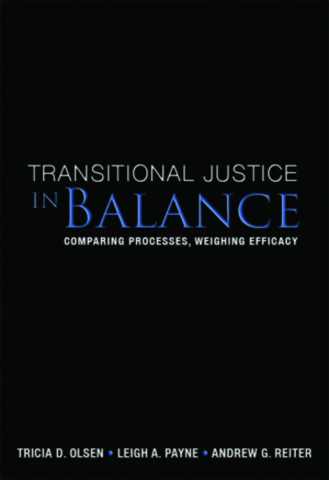 In the first project of its kind to compare multiple mechanisms and combinations of mechanisms across regions, countries, and time, Transitional Justice in Balance: Comparing Processes, Weighing Efficacy systematically analyzes the claims made in the literature using a vast array of data, which the authors have assembled in the Transitional Justice Data Base.

Tricia Olsen is associate dean of undergraduate programs and associate professor in the Department of Business Ethics and Legal Studies. She is also the Marcus Faculty Fellow.

Olsen teaches and studies about the political economy of development in emerging economies, with a focus on Latin America. In addition to publishing widely in business ethics, management and political science outlets, she has consulted for the United Nations Business & Human Rights Working Group and the World Bank, among other organizations. Olsen’s work has been funded by USAID, NSF, the British Academy and the Carnegie Corporation. She is the co-director of the Daniels-Korbel Global Business and Corporate Social Responsibility Certificate.

Andrew G. Reiter is Associate Professor of Politics and International Relations and Chair of Politics at Mount Holyoke College. Reiter's research agenda is centered on understanding the effectiveness of policies that reduce violence. These include policies that aim to secure peace where violence is already occurring, as well as those intended to deter or prevent future violence.

Reiter's most recent book Fighting Over Peace: Spoilers, Peace Agreements, and the Strategic Use of Violence (Palgrave Macmillan, 2016), explains why some civil war peace agreements are implemented rather peacefully while others come under attack from a variety of violent actors. Furthermore, it shows why these attempts at "spoiling" peace prove successful following some agreements and not others. In examining the conditions under which spoilers arise, and their ultimate impact on peace processes, he uses an original dataset of spoiling following over 300 civil war peace agreements in the post-Cold War era.

Reiter is also a co-founder of the Transitional Justice Data Base Project and a collaborator on the Transitional Justice Research Collaborative, both of which have produced comprehensive, global datasets of trials, truth commissions, amnesties, reparations, and lustration programs used by states over the past four decades to engage past human rights violations. The projects have received funding from a number of sources, including the National Science Foundation, the United States Institute of Peace, and the Smith Richardson Foundation. Stemming from these projects, Reiter is a co-author of a book Transitional Justice in Balance: Comparing Processes, Weighing Efficacy (United States Institute of Peace Press, 2010), as well as numerous articles and book chapters in such venues as Human Rights Quarterly, International Studies Review, and Journal of Peace Research.

In a third project (with Brett Kyle), Reiter examines the use of military courts to shield armed forces personnel from accountability for human rights abuses. They have published two articles on military courts in Latin America. They are now in the process of writing a book manuscript covering the topic globally.