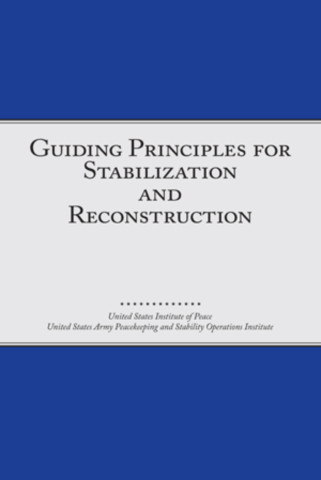 Guiding Principles for Stabilization and Reconstruction

Guiding Principles for Stabilization and Reconstruction presents the first-ever, comprehensive set of shared principles for building sustainable peace in societies emerging from violent conflict. The manual serves as a tool for U.S. government civilian planners and practitioners engaged in stabilization and reconstruction (S&R) missions and is a valuable resource for international actors and nongovernmental organizations.

"This book will have an incredible impact on the future of civil-military integration. Together with the Army's revolutionary Stability Operations doctrine, these complementary manuals will influence our national security for generations. No civilian should deploy without them."

The United States Institute of Peace is a national, nonpartisan, independent institute, founded by Congress and dedicated to the proposition that a world without violent conflict is possible, practical, and essential for U.S. and global security. In conflict zones abroad, the Institute works with local partners to prevent, mitigate, and resolve violent conflict. To reduce future crises and the need for costly interventions, USIP works with governments and civil societies to build local capacities to manage conflict peacefully. The Institute pursues its mission by linking research, policy, training, analysis, and direct action to support those who are working to build a more peaceful, inclusive world.

Established in 1993 initially as the Peacekeeping Institute (PKI), with the challenge of developing a doctrinal base for peacekeeping operations, the U.S. Peacekeeping and Stability Operations Institute (PKSOI) has grown in both size and outreach. Today, PKSOI is a regular partner at the UN in association with the UN DPKO and interacts across many UDG agencies (e.g. USAID), NGOs, and IOs with a peacekeeping/stability operations focus to address both the military and non-military aspects of peacekeeping.

PKSOI has continued to evolve as the US Army’s Center of Excellence for Peace and Stability Operations at the strategic and operational levels. In 2013 PKSOI assumed its newly designated role as the Lead Agent for Joint Proponency for Peace and Stability Operations. For the foreseeable future, PKSOI will be the pre-eminent trainers of US forces preparing to conduct multinational peacekeeping operations. PKSOI and its partners will also focus on collecting the key lessons learned over the last Decade of War, ensuring that key peacekeeping capabilities are adequately documented so that they can be rapidly re-generated to respond to US national requirements in the years to come. In addition to PKSOI’s mission to enable the success of ongoing and future Peace and Stability Operations activities and missions, we are a specified institute within the U.S. Army War College (AWC). In our role as an institute of USAWC, PKSOI participates actively with the War College to provide the Army’s future senior leader with the necessary knowledge and skills needed to plan, conduct and assess P&SO missions and to integrate P&SO doctrine, concepts and policy into Army strategy and operational missions. PKSOI achieves this by participating within the USAWC Core Curriculum and by providing multiple P&SO-related elective courses for the USAWC student body.