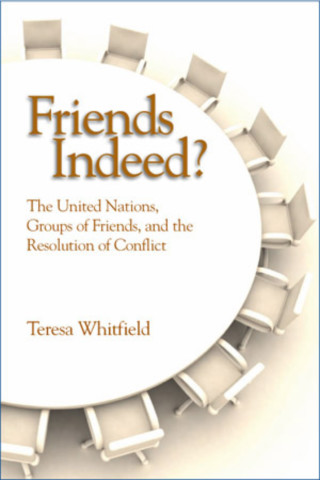 Addressing an increasingly important and greatly understudied phenomenon in international affairs, this groundbreaking volume analyzes the formation, actions, and efficacy of groups of states created to support UN peacemaking and peace operations. While these groups—Friends of the Secretary-General and related mechanisms—may represent just one small component of the United Nations’ increased involvement in conflict management, they have fast become a critical element in today’s system of global-security governance.

Bringing to the study a rare combination of both a scholarly eye and an insider’s perspective of the United Nations, Teresa Whitfield provides an overview of the types of groups and coalitions that have been actively engaged in issues of peace and security within the UN sphere and identifies five core factors for their success. She also offers case studies of El Salvador, Guatemala, Haiti, Georgia, Western Sahara, and East Timor, illustrating in a comparative manner the utility and limitations of groups of Friends under widely different conditions. She ultimately arrives at conclusions and presents recommendations that will no doubt prove vital to policymakers when deciding whether to form a group of Friends or another more informal coalition. Indeed, the study provides compelling evidence for the impact—both positive and negative—that external political intervention can have on peace processes.

An original, important, and timely study, Friends Indeed? adds substantially to the literature on international conflict resolution and the role of international organizations in resolving crisis. Perhaps more significant, it greatly furthers understanding of how and in what circumstances the United Nations secretary-general and secretariat can work productively with groups of states in the resolution of conflict.

“This is an engaging work on an important, but understudied phenomenon in international affairs. Friends Indeed? adds substantially to the literature on international conflict resolution and the role of international organizations in resolving crisis or facilitating its resolution through other actors. It will be of interest to both students and practitioners of international diplomacy, peace studies, and related topics.”

Teresa Whitfield is a Non-Resident Fellow at New York University’s Center on International Cooperation (CIC). Teresa has been senior advisor to the president of the International Crisis Group since January 2015. While a fellow at New York University ’s Center on International Cooperation from 2008 to 2014, she also served as a senior advisor to the Geneva-based Centre for Humanitarian Dialogue. Previously, she was director of the Conflict Prevention and Peace Forum at the Social Science Research Council and spent five years as an official of the UN’s Department of Political Affairs.

Ms. Whitfield is a member of the Board of Trustees of the Conciliation Resources, which is based in London, and serves on the Advisory Board of the Conflict Prevention and Peace Forum. She holds a B.A. from Cambridge University and an M.A. from the University of London.