Teresita C. Schaffer, Senior Advisor at McLarty Associates, advises clients on matters in India and South Asia. In a 30-year career in the US Foreign Service, Ambassador Schaffer was recognized as one of the State Department’s leading experts on South Asia, where she spent a total of 11 years. Her other career focus was on international economic issues. She served in US embassies in Pakistan, India, and Bangladesh, and from 1992-95 as US Ambassador in Sri Lanka. During her assignments in the State Department in Washington, she was Director of the Office of International Trade and later Deputy Assistant Secretary of state for the Near East and South Asia, at that time the Senior South Asia Policy position in the State Department.

Ambassador Schaffer was previously a Nonresident Senior Fellow at the Brookings Institution. She also created the South Asia program at the Center for Strategic and International Studies, and directed it from 1998-2010. That program produced path-breaking research on economic, political, security and risk management trends on India and Pakistan, but also more broadly on the region that extends from Afghanistan through Bangladesh.

Ambassador Schaffer is the author of India at the Global High Table: The Quest for Regional Primacy and Strategic Autonomy, published in 2016 (co-authored with her husband, Howard Schaffer); as well as India and the US in the 21st Century: Reinventing Partnership, published in 2009 and widely recognized as the leading work on the post-2000 US-India relationship and its future prospects. Ambassador Schaffer and her husband also wrote How Pakistan Negotiates with the United States, published in 2011. Earlier writings included Pakistan’s Future and US Policy Options (2004); India at the Crossroads: Confronting the Challenge of HIV/AIDS (2004) and a series of other studies on HIV and public health issues in India; and two studies on women in development in Bangladesh (1985).

Ambassador Schaffer received a BA from Bryn Mawr College and studied at the Institut d’Etudes Politiques in Paris. She did graduate work in economics at Georgetown University. She speaks Hindi, Urdu, French, Swedish, German and Italian, and has studied Bangla and Sinhala. 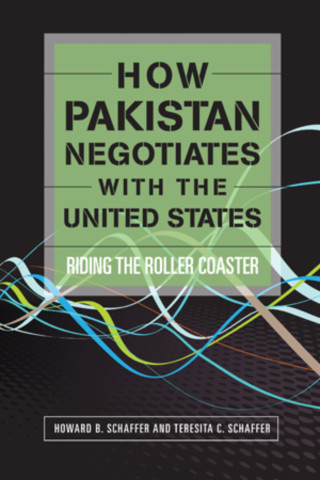 How Pakistan Negotiates with the United States

How Pakistan Negotiates with the United States analyzes the themes, techniques, and styles that have characterized Pakistani negotiations with American civilian and military officials since Pakistan’s independence.