Mr. Alvaro de Soto is currently a member of the Global Leadership Foundation, and a Senior Fellow at the Ralph Bunche Institute in New York.

Mr. Alvaro de Soto’s distinguished career includes 25 years with the United Nations, where he worked extensively on issues in the Americas, Europe, Asia, and the Pacific. He first joined the United Nations in 1982 as Special Assistant to Secretary-General Javier Pérez de Cuéllar. In 1990, as the Secretary-General’s representative, he conducted successful peace negotiations between the government of El Salvador and the FMLN, which culminated in the 1992 Peace Accord.

Since 2011, Mr. de Soto has led a masters seminar on post-Cold War conflict resolution at the Paris School of International Affairs (PSIA) at Sciences Po, in Paris. He has published a number of articles and book chapters, including the recent “Diplomacy and Mediation” for Wiley-Blackwell’s 2014 Handbook on Global Security Policy. Mr. de Soto also hosts “Conversations with Alvaro de Soto,” a series of public interviews with senior mediators and negotiators at Columbia University. 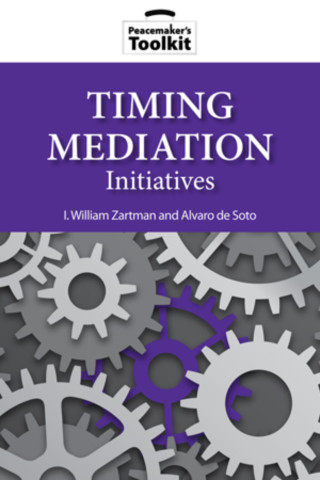 This toolkit lays out five steps mediators can take to determine when a conflict is ripe for mediation.