Betty Bigombe, a Ugandan national, has played a key role in conflict resolution in Africa. She led the peace and humanitarian efforts in northern Uganda, first in the 1990s as Minister of State for Northern Uganda and again as chief mediator to the conflict in the mid-2000s.

In 2014, she received the Ordre National de la Legion d’honneur, one of a number of awards honoring her long-standing commitment to peace and humanitarian affairs throughout her career. Prior to her appointment to the World Bank Group, Ms. Bigombe served as State Minister for Water Resources in the Ugandan Cabinet and Member of Parliament.

She has been a visiting scholar at John Hopkins University’s School of Advanced International Studies, the Woodrow Wilson Center and a Fellow at the United States Institute of Peace, consulting on the impact of war and violence. She has served as a Commissioner for the Women’s Refugee Commission and led election observer missions in Zimbabwe and Rwanda.

Her career has included a development focus in previous positions at the African Development Bank and at the World Bank where she was a Senior Social Scientist focusing on gender and conflict, disarmament and child soldiers. Ms. Bigombe holds a Masters in Public Administration from Harvard University and a Bachelor of Arts in Sociology and Rural Economy from Makerere University in Uganda. 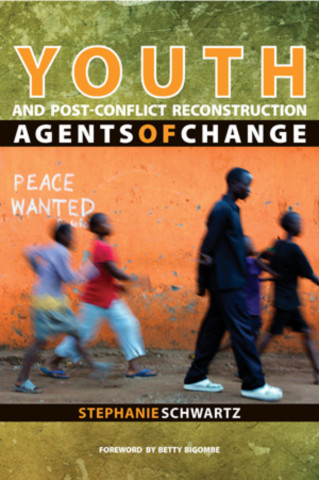 In Youth and Post-Conflict Reconstruction: Agents of Change, Stephanie Schwartz goes beyond these highly publicized cases and examines the roles of the broader youth population in post-conflict scenarios, taking on the complex task of distinguishing between the legal and societal labels of “child,” “youth,” and “adult.”