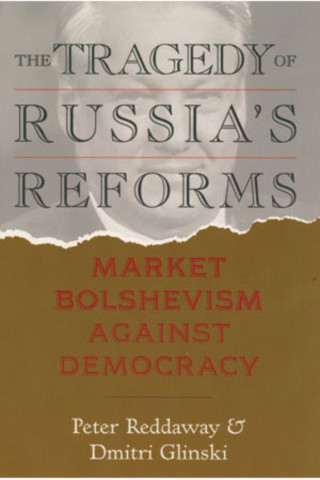 The Tragedy of Russia's Reforms

The Tragedy of Russia’s Reforms presents a boldly original analysis of the collapse of the Soviet Union and the birth of the Russian state. The keys to understanding these events, the authors argue, are the prescriptions of Western “transitologists,” the International Monetary Fund, and advocates of economic “shock therapy.” These prescriptions allowed the nomenklatura and the financial “oligarchs” to acquire Russia’s industrial and natural resources and to heavily influence the country’s political destiny. In this long-awaited, sweeping interpretation, the authors skillfully place the contemporary Russian experience in the context of history, political theory, and Russia’s place in the international system.

In a remarkable book, The Tragedy of Russia’s Reforms: Market Bolshevism against Democracy, American political scientist Peter Reddaway and Russian scholar Dmitri Glinski capture one’s attention by introducing a socio–political lexicon to clarify [a] new period [in Russia]. Instead of a Western–style political and civic nation–state, today’s Russian state has become something we haven’t seen before: ‘an exclusive corporate entity, the property of the state apparatus, competing against similar but much weaker entities in an attempt to monopolize the coercion and protection market.

A compelling and provocative account of Russian postcommunist development. Captures as no other book the dramatic character of the transformation in Russia.

Reddaway and Glinski have written a very important and impressive book— the first comprehensive account of post-Soviet Russia. With a clear voice and a bold thesis, they present a well written, thoughtfully argued and provocative study of this period. No doubt, this book will become one of the most important statements about the Yeltsin era written in the West.

A critical analysis of the Yeltsin years in power. It is a finely argued and frequently provocative account that deserves a respectful hearing.

Peter Reddaway is professor of political science and international affairs at George Washington University. He was a distinguished fellow at the Institute in 1993-94.

Dmitri Glinski (Vassiliev), a research associate at the Institute of World Economy and International Relations in Moscow, was formerly an active member of Russia’s democratic movement.