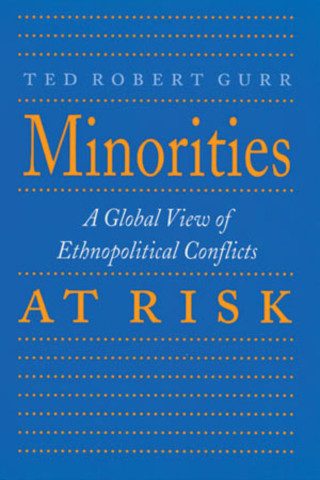 The turmoil in Yugoslavia, the rebellions of the Kurds and Shi’is in Iraq, the ongoing struggle in South Africa—ethnic conflict continues unabated in many areas of the world.

To help us understand the persistence of such conflict, this pioneering work analyzes ethnopolitical conflict in every region of the globe. An ambitious and unprecedented effort, it provides a comprehensive survey of 233 politically active communal groups, plus in-depth assessments of ethnic tensions in the western democracies, the former Soviet bloc, the Middle East, and Africa.

By identifying these groups and examining their disadvantages and grievances, Minorities at Risk attempts to explain why disadvantaged groups mobilize, and it evaluates strategies that have successfully reduced ethnic conflict in the past, including autonomy, pluralism, and power sharing.

This provocative and well-written volume challenges conventional wisdom and raises the discussion about a widespread but little-understood phenomenon to a higher level.

Ted Gurr's book is the first comprehensive report of a project on Minorities at Rist which involves a global survey of over 200 politically active ethnic/communal groups. The book is set out very clearly, and from this aspect would make an ideal text for students.

This book should quickly find its way onto the required reading list for courses on nationalism and ethnic conflict.

A pioneer in the field of political conflict and instability, Dr. Ted Robert Gurr was Professor Emeritus and Distinguished University Professor at the University of Maryland. He frequently collaborated with fellow START researchers and worked on the START project “Turning to Terrorism: Ethnic, Religious and Extremist Organizations” as well as the “Minorities at Risk” project, which he founded.