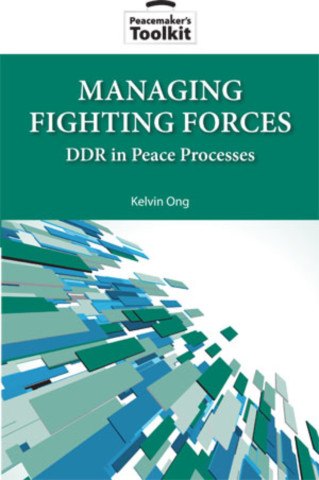 Providing guidance on the mediation and negotiation aspects of disarmament, demobilization, and reintegration(DDR) programs, this toolkit lays out eight detailed steps that mediators can take to establish appropriate linkages between DDR and other aspects of a peace process.

Kelvin Ong was the team leader of the Mediation Support Unit in the United Nation’s Department of Political Affairs, which provides support for UN-led and -supported mediation processes. From 2003 to 2007, he was policy adviser and chief of disarmament, demobilization, and reintegration in the Department of Peacekeeping Operations (DPKO). While in DPKO, he was seconded (in 2006) to the UN Development Programme (UNDP) to lead the Justice and Security Sector Unit, and was responsible for providing technical advisory services on rule of law and SSR to UNDP country offices. A UN staff member since 2001, he has held other headquarters and field positions in the United Nations, including planning officer in the Office of the Assistant-Secretary General for Mission Support, DPKO; special assistant in the UN Assistance Mission in Afghanistan; special assistant to the special representative of the secretary general for Liberia; and special assistant to the assistant secretary-general for the rule of law and security institutions in DPKO. Before joining the United Nations, Ong worked for two years at the International Peace Academy (IPA), a New York–based think tank, where he directed a research program on the United Nations and regional organizations. Prior to working at the IPA, he served in the Singapore Armed Forces (Airborne Rangers) for eleven years.