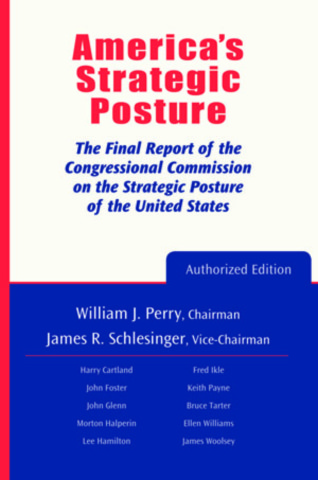 For more than eleven months this bipartisan commission of leading experts on national security, arms control, and nuclear technology met with Congressional leaders, military officers, high-level officials of several countries, arms control groups, and technical experts to assess the appropriate roles for nuclear weapons, nonproliferation programs, and missile defenses. This official edition contains a discussion of key questions and issues as well as the Commission’s findings and recommendations for tailoring U.S. strategic posture to new and emerging requirements as the world moves closer to a proliferation tipping point.

"A bipartisan Congressional commission on U.S. nuclear strategy released its report last week, and it deserved more attention than it got. It delivered a candid message that not many want to hear: We're a long way from a nuclear-free world. . . . The commission's recommendations provide a welcome dose of nuclear realism. The Administration and Congress ignore them at the nation's peril."

The Strategic Posture Review Commission was tasked by Congress to “examine and make recommendations with respect to the long-term strategic posture of the United States.” Because that the definition of “strategic posture” is evolving, the Commission examined the nation’s strategic posture in all of its aspects—deterrence strategy, arms control initiatives, and nonproliferation strategies. This includes all roles of strategic weapons and tools to counter military threats to the United States and its allies, including missile defense. Additionally, the Commission examined the relationship between the nation’s military capabilities and both its arms control and nonproliferation strategies.

Congress created the Commission as part of the National Defense Authorization Act of 2008. The House Armed Services Committee named six of the Commission’s twelve members; the Senate Armed Services Committee named the other six, three Democrats and three Republicans each. The United States Institute of Peace (USIP) was selected to facilitate the commission’s work. The Institute for Defense Analyses assisted the Commission with the classified and technical aspects of its work, as USIP does not handle classified materials.

To study the many questions of policy and strategy within the Commission’s purview, the Commission formed, and USIP facilitated, five working groups of experts drawn from across the political spectrum to explore issues of strategic policy and strategy, force structure and deterrence, countering proliferation, the nation’s nuclear infrastructure, and the evolving security environment.