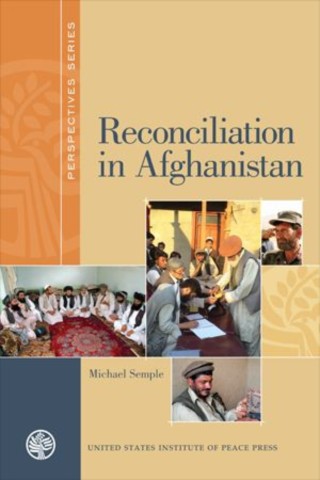 "This study presents an excellent illustration of the diversity of the groups and networks that are grouped under the term Taliban by the media and inexperienced analysts. Reconciliation in Afghanistan is well conceived and well written. It effectively suggests series of steps Afghans, the United States, and the international community might take as they all seek to turn a new page in the efforts to address the security and stability issues that continue to plague Afghanistan and the region."

"As the Obama administration develops and implements its revised strategy on Afghanistan and Pakistan, a principle topic of debate is “reconciliation”—how to deal politically with Taliban and other insurgents who are not pursuing al-Qaeda’s global objectives in search of a political solution. Michael Semple brings to bear a wealth of practical experience on the ground in Pakistan and Afghanistan. He has spoken in-depth with more insurgent commanders than virtually any international official, and his long service in the region has equipped him with the knowledge, language skills, and personal networks to analyze such contacts in depth. The result is the most detailed and knowledgeable road map to date for how to pursue dialogue and negotiation with Taliban and other Islamist guerrillas in the area that are today sheltering the leadership of al-Qaeda."

“This invaluable book offers a perspective on reconciliation that is available nowhere else in the literature on the subject. The author's comprehensive, balanced, and objective review of reconciliation initiatives and their effectiveness indicate a familiarity with his subject that is unmatched. Semple goes well beyond merely examining approaches to reconciliation, in providing the context necessary to understand why various strategies may have greater or lesser success.”

"Michael Semple’s Reconciliation in Afghanistan is based on a vast knowledge of the country and many discussions with the members of the Taliban. It is the best blueprint available about how to accomplish the complex and very necessary task of bringing ‘reconcilable’ Taliban into ordinary Afghan politics, arguing that it is far from impossible, but appropriately underlining the many obstacles that will be encountered on the way to this goal. Semple’s study is deeply researched and well-calibrated in its analyses and judgments."

Michael Semple served as deputy to the European Union special representative to Afghanistan in 2004-2007.