Helena Cobban is a writer and researcher on international relations, with special interests in the Middle East and the international system. She is the author of seven books on current international affairs, four of them focusing on the Middle East. She contributed a regular column on global issues to The Christian Science Monitor, 1990-2007, and is a Contributing Editor of Boston Review.

In 1982, she moved to the United States to take up a research fellowship at Harvard University Center for International Affairs, where she wrote her first book, The Palestinian Liberation Organisation (Cambridge U.P., 1984.) In 1985, despite not having a doctorate, she won an SSRC-Macarthur post-doc grant in International Peace and Security Studies, which she took up at the Center for International Security Studies at Maryland (CISSM), using that experience to write a book on US-Soviet interactions in the Syria-Israel theater.

Throughout the 2000s, she undertook numerous research/writing trips to the Middle East. In February 2003 she started publishing Just World News, a blog on global issues that gained a broad global readership and was cited in Le Monde diplomatique and elsewhere.

In early 2010, she founded the publishing company Just World Books, which proceeded to publish 38 original titles on Middle Eastern and other international issues. In early 2018, the company entered hiatus from issuing new titles. Ms. Cobban then spent more time running Just World Educational, a non-profit, where as Executive President she also contributed to its blog, its podcast series, and other programs. In Spring 2019, she resumed her own writing career.

She was a long-time member of the International Institute for Strategic Studies and sat for many years on the Middle East Advisory Committee of Human Rights Watch and on the board of Virginians for Alternatives to the Death Penalty. In 2007-08 she was a 'Friend in Washington' with the Friends Committee on National Legislation, and in 2008-11 a member of Search for Common Ground's US-Syria Working Group. 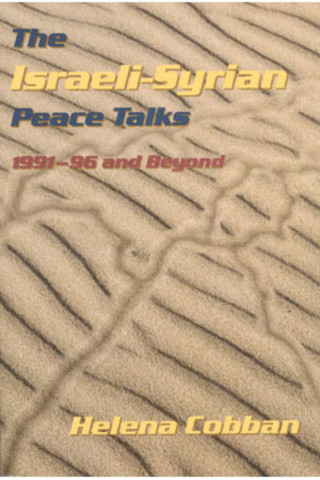 From the opening of the Middle East peace process in Madrid in 1991 to the marathon round of negotiations at Maryland’s Wye Plantation in 1996, the unsuccessful attempt to forge a peace agreement between Israel and Syria spanned five years and many venues.

Helena Cobban here provides a fascinating look at the painstaking negotiations between the two Middle East powers that thrice went to war in the past half-century, and the role that the United States played in trying to bring Israel and Syria closer together on crucial points.

Through interviews with U.S. officials and key players in the Israeli and Syrian delegations, Cobban paints a portrait of small but important breakthroughs—and often frustrating encounters—between the Israelis and the Syrians as they sought to negotiate not just a bilateral peace treaty, but also a broader regional peace. The study concludes with a careful analysis of what went wrong in the final phases of the negotiations and future prospects for resuming the talks.